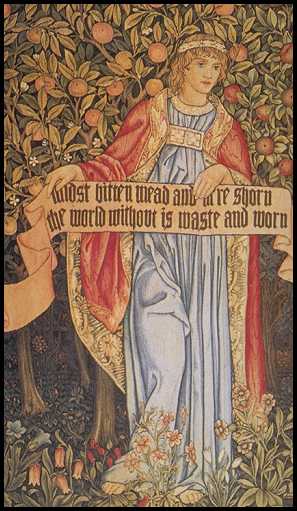 William Morris (1834-1896) is best known as a compatriot of the Pre-Raphaelite Brotherhood and the father of the Arts and Crafts movement.

The exhibition description for "William Morris and the Kelmscott Press, at the John Rylands Library, Manchester, 1996, called Morris "...one of the greatest English geniuses of the nineteenth century, extending considerable influence over a wide number of different fields. He was a designer of clothes, fabrics and wallpapers which still remain an important influence in design today. As a member of the Pre-Raphaelite Brotherhood, with his friends Rosetti and Burne-Jones, he helped to create a new style in painting, frescos and stained glass. He was a poet of some distinction ... and was invited to become, though never became, Poet Laureate. He was a trained architect and, although he never practised ... he was influential in both the preservation of old buildings and new town planning. As a translator from Icelandic he brought to the attention of the English reading public the value of the heritage of the ancient sagas. He was an original socialist thinker and contributed much to the political thought of the time. As a craftsman and proprietor of his own company he spread ideals of individual workmanship, namely the organic wholeness of all the arts and resistance to mass-production. Finally, towards the end of his life, he turned his attention towards fine printing, founding the Kelmscott Press, the greatest and most influential of the nineteenth-century private presses."

Other sources will remind us that Morris also resurrected free-hand embroidery as an art form, rediscovered almost-forgotten techniques for extracting and setting natural dyestuffs, and pioneered the return to classic typography in the face of the ghastly hordes of slab-serif fonts that characterize commercial printing of the nineteenth century.

But what is intriguingly absent from the most laudatory surveys of the man and his work is the fact that William Morris almost single-handedly invented the medieval-flavored imaginary world fantasy.

The Northern Thing. In 1868, Morris met Eiríkr Magnússon, an Icelander living in England, and the two of them embarked on a series of translations of the Old Norse sagas, with Magnusson providing literal translations and Morris resetting them as poetry. Legends' page on Sigurd the Volsung explores Morris's translation of Völsungasaga and its progeny, the epic poem The Story of Sigurd the Volsung and the romance in verse and prose The House of the Wolfings, and their profound influence on the work of J.R.R. Tolkien.

Prose translations by Eiríkr Magnússon and William Morris, as PDF files at In Parentheses. New ! The Earthly Paradise is a cycle of poems surrounded by a framing device, based on the model of Chaucer's Canterbury Tales. The framing story tells of Norse seafarers who find the descendants of a band of Greek wanderers living on a remote island in the West; they meet monthly for a year and tell stories based on Greek and Norse legends. In Tolkien: A Biography, Humphrey Carpenter points out that the framing device on the earliest version of The Silmarillion (later abandoned) was based directly on the model of The Earthly Paradise.

Selections from The Earthly Paradise and examples of Morris's other poetry can be found at Selected Poetry of William Morris, part of Representative Poetry Online at the University of Toronto.

The prose romances as hypertext at the University of Adelaide. (New !)

William Morris: Dreamer of Dreams, an essay on Morris the fantasist by Ian Covell.

Essays and Addresses on the Decorative Arts

The Beauty of Life: William Morris and the Art of Design, an exhibit at the Huntington Library. New !

The One Essential Reference

Willam Morris, edited by Linda Parry, Abrams, 1996, ISBN: 0810942828, was issued in conjunction with the massive exhibition William Morris 1834-1896 at the Victoria and Albert Museum in 1996. This extensively annotated catalog dicusses Morris's life and work, with commentary by specialists on textiles, wallpaper, illustration, furniture, architecture, typography, calligraphy, tiles, stained glass, and other decorative arts. The text discusses Morris's art, life, and business in the context of his times.
Top · Home · Colophon · Notes on the Illustrations · Site Map
29 February 2004 pkm