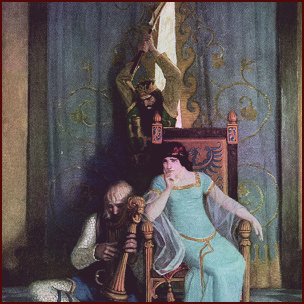 The tale of Tristan and Iseult originated outside of the cycle of stories of King Arthur and his circle of knights, but two became intertwined early on.

The story of how Tristan, nephew of King Mark of Cornwall, and Iseult, the King's Irish bride, unknowingly drink of a love potion and are thereby doomed has remained fixed in its essentials since the earliest tales, but the motivations and characterizations of the various actors are malleable. King Mark, in particular, devolved over time from a heartbroken husband to a cowardly murderer.

It is commonly believed that shadowy historical figures lie behind the Tristan story: "Drustanus son of Cunomorus," recorded on the famous "Tristan Stone," a grave-marker inscribed in sixth-century Latin found near Fowey in Cornwall, and a King "Marcus" also called "Cunomorus," recorded in a ninth-century Life of the Breton saint Paul Aurelian.

Tristan and Isolt, a survey with links to texts, including poems by Tennyson, Swinburne, and William Morris, at the Camelot Project.

Mark King of Cornwall, also at the Camelot Project, summarizes the historical sources. Sir Tristrem, the Middle English poem, edited with an extensive introduction to the origins of the tale by Alan Lupack at TEAMS. Chevrefoil, a version of the tale in a lai of Marie de France, translated by Judith P. Shoaf. [PDF] La légende du Roi Marc'h aux oreilles de cheval (The Legend of King Mark with the Horse's Ears), a Breton folktale featuring Tristan and King Mark (in French). Tristan and Isolt in Modern Literature in English, a bibilography by Alan Lupack at the Camelot Project. Tristan und Isolde, a synopsis of Richard Wagner's opera, from Metropolitan Opera. An Investigation into the Symbolism of Heraldry in the Legend of Tristram and Isoud by Craig Levin. The Story of the Champions of the Round Table (1905) tells the stories of Sir Lancelot, Sir Tristram and Sir Percival. The text and the complete illustrations, at the Internet Sacred Text Archive's English Folklore collection. New!

Cornwall and the West

Dumnonia, part of Celtic Britain: Southern Britain's Lost Kingdoms, by Peter L. Kessler. New URLs. Kingdoms of the West-Country, part of Early British Kingdoms, includes biographies of the Kings of Dumnonia, Cerniw and Lyonesse; the ancestry of one of the earliest Kings, Conan Meriadoc; and the probable pedigree of the Kings of Glastenning. History of Cornwall by Bruce Jewell. Istori an Yeth Kernewek: The History of the Cornish Language by David Annear.